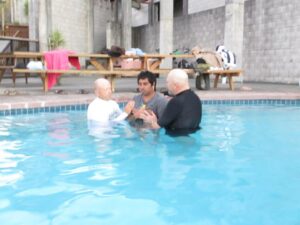 Why doing discipleship courses won’t necessarily produce true disciples! We don’t become a disciple the moment we are saved. We become a follower of Jesus. Then He calls the believer to become His disciple. For He who has an ear to hear.

1. The Sinner Is Called By The Father For Salvation

No one can come to Christ unless the Father draws them. The Father CALLS EVERY SINNER to come to Christ for salvation. When they answer that call they become His follower.

John 6:44-47 NASB
No one can come to Me unless the Father who sent Me draws him; and I will raise him up on the last day. [45] It is written in the prophets, ‘And THEY SHALL ALL BE taught OF GOD.’ Everyone who has heard and learned from the Father, comes to Me. [46] Not that anyone has seen the Father, except the One who is from God; He has seen the Father. [47] Truly, truly, I say to you, he who believes has eternal life.

2. The Believer Is Called By The Son For Discipleship

But no one can come to the Father but through Christ’.

The Son CALLS BELIEVERS to come to the Father for sanctification, so they can become true disciples.

The first call comes from the Father calling the sinner to come to Christ for salvation to become His son. This is when we become His followers.

The 2nd call comes from the Son calling the follower to come to the Father to be sanctified, to become His disciple.

Therefore, for the believer to become a true disciple, they need to hear God’s voice calling them to become His disciple, and answer that call.

The right question is, have you heard His voice and have you answered His call?… The evidence that you have answered this call is… ‘You will love God so much that in comparison, it will look as though you hate everything and everyone else’. Then you can say… “Yes Lord. Here I am, send me”.

Luke 14:26 NASB
“If anyone comes to Me, and does not hate his own father and mother and wife and children and brothers and sisters, yes, and even his own life, he cannot be My disciple.

Until you do this, you will always struggle with yourself, and everything becomes works based Christianity, which will frustrate you and the grace of God, and will never produce true life or endurance, or fellowship with Him. Many have answered this call, even though they have not heard that there is one. They simply heard His voice and answered His call, yes Lord.

What makes this difficult to see is the transition between the Old Covenant and the New Covenant.

While Jesus was on earth, He and His Disciples were still under the Old Covenant, until after Jesus ascended and sent the Holy Spirit back to the earth, and established the New Covenant. So they were not even able to born again until Pentecost. They could only be followers. Everything they did up until then was done under the blood of Bulls and of Goats, which represented the blood of Jesus who was to come, until the Holy Spirit came. Paul went from a follower fearing for His life to laying it down for His glory.

It is apparent here that the Philip the Apostle, still hadn’t had the revelation of who Christ was. Although he was a follower of Christ, he couldn’t be born again because the Holy Spirit had not yet come. Therefore he could not become a true Disciple.

6 But now He has obtained a more excellent ministry, by as much as He is also the mediator of a better covenant, which has been enacted on better promises through His blood and Resurrection.

7 For if that first covenant had been faultless, there would have been no occasion sought for a second. 8 For finding fault with them, He says, “Behold, days are coming, says the Lord, When I will effect a new covenant with the house of Israel and with the house of Judah;

9 Not like the covenant which I made with their fathers. On the day when I took them by the hand to lead them out of the land of Egypt; For they did not continue in My covenant, And I did not care for them, says the Lord.

10 “For this is the covenant that I will make with the house of Israel. After those days, says the Lord: I will put My laws into their minds, And I will write them on their hearts. And I will be their God, And they shall be My people.

11 “And they shall not teach everyone his fellow citizen, And everyone his brother, saying, ‘Know the Lord,’ For all will know Me, From the least to the greatest of them.

12 “For I will be merciful to their iniquities, And I will remember their sins no more.”

13 When He said, “A new covenant,” He has made the first obsolete. But whatever is becoming obsolete and growing old is ready to disappear.

14 But may it never be that I would boast, except in the cross of our Lord Jesus Christ, through which the world has been crucified to me, and I to the world.15 For neither is circumcision anything, nor uncircumcision, but a new creation. 16 And those who will walk by this rule, peace and mercy be upon them, and upon the Israel of God.

18 Now all these things are from God, who reconciled us to Himself through Christ and gave us the ministry of reconciliation, 19 namely, that God was in Christ reconciling the world to Himself, not counting their trespasses against them, and He has committed to us the word of reconciliation.

20 Therefore, we are ambassadors for Christ, as though God were making an appeal through us; we beg you on behalf of Christ, be reconciled to God. 21 He made Him who knew no sin to be sin on our behalf, so that we might become the righteousness of God in Him.